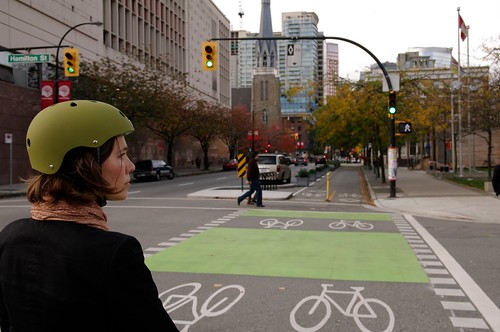 Whether you drive a car or ride a bike, there’s no question that street safety must improve here in California. In 2009, nearly 1,300 people were killed in car accidents and 100 were killed in bicycle accidents here in California alone. According to the Fatality Analysis Reporting System, California mourns more than 3,000 traffic deaths each year if you add pedestrians and motorcycles to the mix. Fortunately, reports the San Jose Mercury News, that could all change thanks to a series of street makeovers throughout the Bay Area.

Cities throughout California have proposed traffic plans designed to ease congestion and make streets safer by reducing the number of vehicle lanes in favor of pedestrian spaces and bicycle lanes. Of course, as with any measure that will mess with peoples’ commutes, these measures have quickly become contentious topics of debate. Critics say that fewer vehicle lanes will lead to more traffic with little benefit to city dwellers. Proponents, on the other hand, point to studies that show a direct relationship between increased bike ridership and lives saved.

Bike lane proponents also argue that the United States is no longer the country that needed to wed itself to cars and interstates half a century ago. “For decades, planning has focused on the efficient movement of cars,” said San Jose Department of Transportation Director Hans Larsen. “The result has been communities that are dependent on cars and are not conducive to walking and biking and transit.”

So if implemented without too much of a public outcry, the traffic policies described below could lead to cities throughout California that place more of an emphasis on cycling, walking, and all around street safety. “By designing and building more complete streets, people are able to choose to walk, drive, bicycle or take transit,” said Chadrick Smalley, a Richmond development project manager. “Streets that are designed solely for automobile travel often do not feasibly permit that choice to be made and, instead, force people to drive.”

Take a look at the street reforms planned throughout California, as laid out by the San Jose Mercury News:

These are the major development projects currently in the works. But a handful of cities across California, including Oakland, Hayward, Pleasanton, San Mateo and Redwood City, are also vamping up efforts to improve bicycle and vehicle safety. Are you in favor of these bicycle friendly efforts? Let us know what you think in the comments section below, or on our Facebook page.