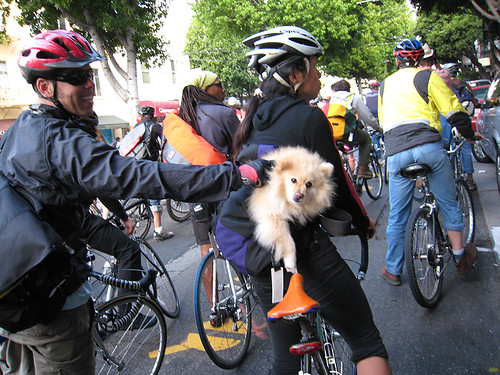 It’s become a type of conventional wisdom that more cyclists on the road means more bicycle accidents. But over the past decade, some of the country’s most bike friendly cities have shown that safety in numbers means that the cities with the most cyclists on the road will also witness the fewest bicycle accidents. That is certainly the case in Davis California, which is considered a mecca for bicyclists where 16 percent of the population bikes to work, and boasts a fatality rate ninety percent below the California average. Even newer evidence suggests that in addition to safety in numbers, California cities benefit from structural policies that keep cyclists safe.

For the journal Environmental Practice Wesley Marshall and Norman Garrick studied evidence from 24 mid-sized California cities with all types of bicycle use. Across the board, they found that the highest traffic bicycle cities had the lowest fatality rate. Major bike cities, for example, reported an average of 2.5 fatalities per 100,000 residents, compared to 9 deaths per 100,000 in the low-traffic bike cities. What’s more surprising is that Marshall and Garrick found that the fatality rate was much lower for all types of transportation in the high traffic bike cities

Their report’s are clear about the troubling nature of their findings: that the cities with few cyclists report twice as many bike deaths compared to the cities with many more cyclists. “In other words, for anyone brave enough to use a bike in these low biking cities,” the authors write for Planetizen, “the risk of injury or death was astronomical. Conversely the traffic fatality risk from bike riding in bike friendly cities is much lower than is generally recognized.”

This trend is not unique to cities in California. Other traditionally bike friendly cities like Cambridge, Massachusetts and Portland, Oregon have also seen a boost in bicycle ridership paired with a decrease in bike fatalities. This supports the notion that putting forward funds to improve street safety could save lives and trim the city’s budget by a bundle in the long run.