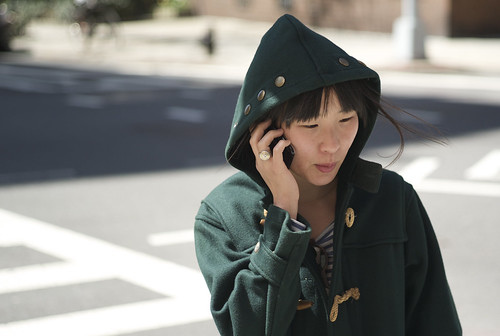 You may have seen the video of a mall shopper falling into a fountain while writing a text message on her cell phone. If not, watch it here. Pedestrian mishaps like this have led some to ask whether walkers should be subject to regulation similar to distracted driving laws that have sprouted up across the country. To most, the idea of getting a ticket for writing a text message or talking on the phone while crossing the street sounds absurd. But a distracted walking law has already been proposed in New York, and some California residents think it should be considered over here as well.

Cherish Johnson, for one, says she constantly runs into near-accidents with distracted pedestrians. “Especially if I’m at a mall, they just step out and I slam on my brakes,” she told ABC Local. Pedestrian accidents are a serious problem here in California, and have already caused 8 pedestrian deaths this year. Safety advocates and city officials have proposed street infrastructure projects to make cities like San Francisco safer for pedestrians, but none have so far suggested that California adopt a distracted walking law.

California Senator Joe Simitian is the most prominent advocate for stricter distracted driving laws here in California. Simitian even caught some criticism earlier this year for writing a distracted driving law that increased fines for cyclists caught texting or talking on the road. “The consequences of a distracted driver are considerably more serious than the consequences of distracted cycling,” said California Bicycle Coalition Communications Director Jim Brown. “As far as I’m aware, there is no accident evidence that points to a problem…this law seems premature.”

Simitian defends the provision against distracted cycling, but uses similar logic to rule out the necessity for a distracted walking law. “At some point we just have to ask folks to be responsible for their own common sense and well being,” he said. But that does not mean, of course, that pedestrians should ignore the potential dangers of texting or talking on the phone while crossing the street. “When you’re a pedestrian, you’re at greater risk than any of us who are out ther at least buckled in and behind the wheel of a car,” he added.

Do your part to avoid additional calls for distracted walking legislation and simply put the phone away while crossing a dangerous or crowded intersection.