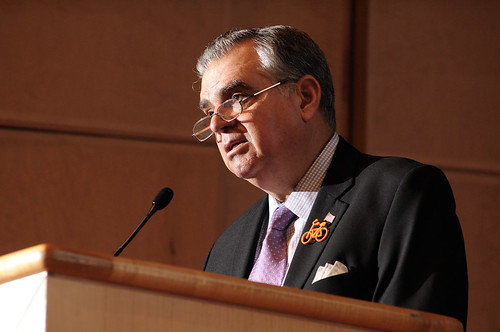 Secretary of Transportation Ray LaHood emerged victorious after an odd scuffle between his agency and an anti-government regulation lobbying group. The Washington-based Seward Square Group circulated a memo this week, claiming that anti-distracted driving efforts are equivalent to “a full-throttle assault on mobile technology,” and that “auto, tech, and insurance industries…have become collateral damage.”

Not wasting any time, LaHood called a press conference to condemn Seward and defend his agency’s crusade to cut down on distracted driving, which is the number one killer of teenagers and responsible for 1.6 million crashes each year. “Regardless of what a powerful lobbying group has to say, the simple fact is that texting and talking on cell phones behind the wheel is a deadly epidemic,” LaHood wrote on his blog. “To suggest otherwise is to put your head in the sand. To spend considerable resources to suggest otherwise is a glaring waste.”

In its original memo, Seward also warned that distracted driving regulation could face the same fate of seat belt laws and enforcement of drunk driving laws. LaHood responded that this is the goal, and it would save lives.

Soon after LaHood’s strong denunciation of Seward, the group withdrew its criticisms, saying that the media dust up was the result of a miscommunication. “We are pleased that the concept has met its goal of expanding dialogue on distracted driving, therefore the proposed coalition is no longer being pursued,” said a spokesman for the short-lived coalition. “We commend Secretary LaHood for his leadership in bringing a comprehensive view to this complex issue.”

With new states continually implementing laws against distracted driving, it’s clear that public awareness is moving toward acceptance of more regulation on the local and national level. But, as proven by this most recent scuffle, opponents to the safety movement are out there, attempting to derail the process. That’s part of the reason why a nationwide distracted driving ban has stalled in Congress.

But regardless of the deep pockets of any lobbying group, the statistics remain on LaHood’s side, and we’re likely to see more and more regulations on driving while typing, talking, or texting.

If you are worried about your child texting behind the wheel, consider downloading the GJEL Accident Attorneys’ Parent-Teen Safe Driving Contract to set ground rules for driving and determine rewards for responsible behavior.