How to Safely Cycle In The Easy Bay 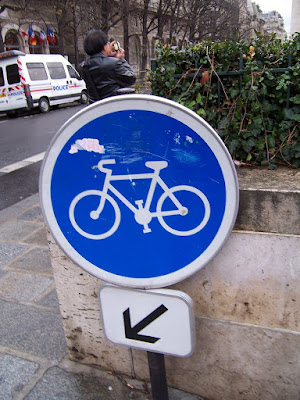 I love riding my bikes. I mean, seriously love it. I love getting to BART or to the grocery store on a bike, or just cruising the Bay Trail. I even love getting all decked out in spandex and trying to get over some of those crazy East Bay hills. But no matter what type of cycling I’m doing, the need for safety is always there.

If you read my first post, you know that I just moved to the East Bay about a month ago. The transition from Wisconsin cyclist to East Bay cyclist has been interesting, to say the least.

I should start with the story of the epic journey. My very good friend got a job in L.A., and I was just about to start at GJEL, so we decided to go on the Great American Road Trip one last time. We loaded my friend’s Subaru with our stuff, and strapped my bike rack on the back. I brought a road bike for training type rides as well as a single speed commuter for getting groceries and getting to BART. My friend brought her trusty vintage commuter, and off we went. The trip went well. The bikes didn’t fall off the car, and no one stole them, or any of their various parts.

We pulled into my apartment, thinking we were victorious, but that was when things fell apart. We decided to move the car to a better parking place, and as my friend backed up the car there was a sickening sort of crunch—the crunch of our bikes on the back of her car colliding with someone else’s car.

Obviously, it wasn’t a good start. However, I was not to be stopped. I promptly visited a bike shop in Oakland and got back on the road. I checked out a Berkeley Bicycle Club meeting and started looking for ways to get to and from work on my bike. As I dove into cycling in the East Bay head first, I learned a few things:

1. I had no idea how to get anywhere.
2. There’s a huge cycling presence here, but there are still plenty of car v. bike accidents.
3. The rolling hills of Wisconsin are flat compared to the insanity of the East Bay hills.

I should address each of these individually:

First, I had no idea how to get anywhere.

This is a pretty serious problem, not just because I could end up lost or late for an event, but because of the safety concerns it presents. When you’re familiar with the city you’re riding in, it’s easy to know which lane to be in, which corner to turn at, and what traffic will be like on each street. Without that knowledge, you often find yourself stuck on a busy road without a bike lane, or trying to pay attention to road signs when you really need to be paying attention to cars whizzing past you.

The solution for me was to get out some maps and spend a lot of time just studying them, and memorizing the order of major streets, which streets went all the way to my apartment, and which dead-ended before it. I learned where the Bicycle Boulevards are, and where there are bike paths that I could take instead of roads. I planned my routes ahead of time, and saved myself a lot of stress about where I was headed while in traffic.

Second, there is a huge cycling presence in the East Bay, but still a large number of accidents involving bicycles and cars.

Of course accidents happen everywhere, but I was honestly surprised that there are so many here. At bike shops in the East Bay I heard stories about (and saw evidence of) serious injuries—one worker had her leg in a walking cast, one customer had a broken collar bone. Though there does appear to be safety in numbers when you look at the City of Berkeley’s Cycling Risk Index, I was reminded that there’s still always the possibility of a serious accident. All the more reason to keep wearing my helmet, keep my bike in tune, and plan my trip before heading out.

Finally, the hills here are insane!

I picked one of the hottest Saturdays of the year so far to make my first trip up into the hills between Berkeley and Orinda, and a whole slew of safety concerns came to mind while I was doing it. I had only brought two bottles of water on my bike and not enough food, the air temperature was around ninety degrees, I was riding a (planned) unfamiliar route, and I’d only ever tackled hills like this one once before, on a vacation to Berkeley five years ago. Where to begin with the safety issue?

In sum, you should always have a planned route, a helmet, and a tuned up bike before you leave the house. If you’re going to do an intense workout, bring a phone, extra water, food, and a friend.

For more safety resources, check out these links:

Common Crashes & How to Avoid Them