A Look at Serious Greyhound Bus Accidents Since 2000 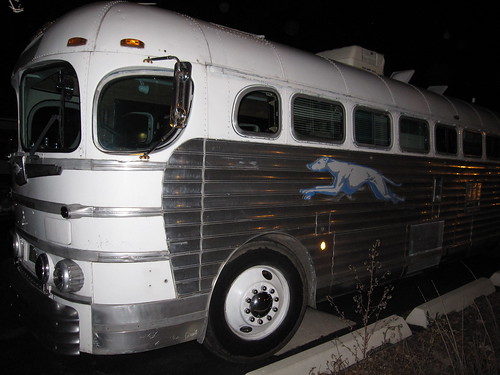 Needless to say, the overwhelming majority of Greyhound’s 25 million yearly passengers split among the company’s 13,000 daily departures arrive at their destinations safely. But the routes that don’t arrive safely stick out, as highlighted by last Thursday’s Fresno accident.  And as the nation’s most recognizable carrier, the severity of its accidents are indicative of the bus industry as a whole.

Here’s a look at ten of the company’s most serious accidents over the past decade:

October 3, 2001: Soon after the terrorist attacks on 9/11, a suspected terrorist murdered a Greyhound driver and sent a bus careening into traffic in Tennessee. The resulting accident killed five and injured more than 30. Authorities considered it an isolated act, and not part of a larger terrorist threat. The assailant, Croatian Damir Igric, was also killed in the crash. The accident prompted Greyhound to boost security procedures at all affiliated bus stations.

September 30, 2002: A year later, another passenger attacked a driver on a Greyhound traveling from Los Angeles to San Francisco. Two passengers died and more than twenty were injured when the bus rolled off an embankment and crashed after the driver was killed outside Fresno, the same location of Thursday’s accident. In response to the attack, Greyhound installed driver shields in all vehicles and prohibited passengers from sitting in seats directly behind the driver.

November 27, 2005: More than three years later, on the same bus route from Los Angeles to San Francisco, a Greyhound bus crashed leaving several injured and two dead, including a 23-year-old pregnant woman. At the time, authorities said driver fatigue was the most likely cause of the 7:10 am accident. “There’s a strong possibility that the driver fell asleep and ran off the road,” said California Highway Patrol Commander Dan Minor. Two years later in a related lawsuit, a epileptic seizure was called the likely cause.

August 28, 2006: On route between New York and Montreal, a Greyhound bus overturned after one of its tires popped on Highway 87, leaving five dead and 48 injured. “I just heard a noise, a rattling noise, and then all of a sudden it lost control,” said driver Sylvia Jean Cracier.

July 3, 2007: On its way from New York City to Richmond, VA, a greyhound bus carrying 48 passengers inexplicably caught on fire on the New Jersey Turnpike.

January 2, 2008: Over in North Carolina near the Virginia border, a Greyhound bus overturned when it rear-ended a truck after that truck slowed to make a turn. The bus fell down the embankment and leaving 48 passengers injured, including the driver and an elderly woman in critical condition.

February 24, 2008: The next month in Pennsylvania, a Greyhound bus flipped over on Interstate 380 near Scranton, injuring more than 40 passengers, two seriously. The cause of accident was not immediately clear, but highway officials said driver fatigue may have been a factor, since the accident occurred at 4:15 am.

March 16, 2010: The week after a Greyhound bus underwent a maintenance check, its driveshaft popped and sent the bus spinning for hundreds of feet before coming to a stop on a highway near San Antonio, Texas. “The driver reacted when she heard the popping sound. It alerted her attention that something wasn’t right,” said Department of Public Safety Captain Steven Tellez. “Certainly without the drive shaft or without the full operation, it could have affected her being able to control her bus.” The accident left two dead and 40 inured.

May 6, 2010: A misunderstanding on a Greyhound bus in New Hampshire led to the perception of a bomb threat and a nine hour standoff with local police authorities in May. The confrontation began when a passenger believed he overheard a bomb threat over the phone while sitting next to a man from Burundi. Though the other passengers evacuated the bus safely, the accused man refused to leave out of fear of retribution. The bomb threat was later found to be false, but a police officer on the scene said it was likely the man simply had a fear of police officers.

July 22, 2010: There remain a handful of important unknowns about the cause and effects of last Thursday’s Greyhound bus accident in Fresno. California Highway Patrol officers have said the driver likely swerved to avoid hitting an overturned SUV, but authorities are unsure about the time or cause of the SUV crash. It is also unknown whether the women in the SUV, who were among the fatalities, were killed by the initial crash, or the Greyhound collision.

Due to the necessity of keeping buses full of passengers to make the ride cost-effective, bus accidents usually cause significant damage both in terms of quantity and severity of each injury. Previous accidents have clearly led to a review, and in some cases a change, in Greyhound’s internal policies and security measures; sadly, this one hasn’t even led to a tweet from the company, let alone a press statement or any internal investigation.

Our thoughts are with the families of those who were killed and injured on Thursday.  We hope the most recent accident in Fresno will serve as a wakeup call that stricter regulations are needed for passenger vehicle safety–for all bus companies, including Greyhound.