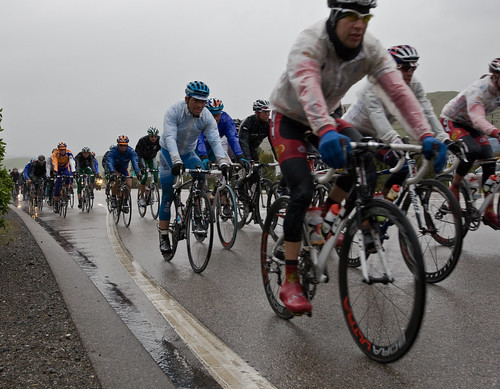 Cars seem destined for distracted driving. Though it’s essential to pay attention to the road and traffic signs, most cars come equipped with a navigation screen, complicated control panel, or at the very least, a radio. So driver safety technology has a lot to compete with. But the matter is different for bicyclists, who aren’t protected by a metal and glass shield and must always be aware of their surroundings. That doesn’t mean technology can’t help reduce bicycle accident injuries. In honor of National Bike Month we’ve compiled a list of five of the most interesting technologies designed to improve bicycle safety. Take a look, and let us know of others in the comments section or on our Facebook page.

If your bicycle crashes in the forest and no one hears, will anyone find out? Well, yes, thanks to top chef Biju Thomas’ new experimental helmet technology. Thomas and a team of scientists and product designers have developed the SenseTech HALO helmet technology to sense major head injuries and alert medical authorities through cell phones to bring help to the injured cyclist. The new helmet design includes a high-tech sensor beneath the helmet’s foam surface that is programmed to know when the cyclist has experienced a major accident. The sensor then transmits a signal via Bluetooth to the cyclist’s smart phone, which alerts the closest relevant hospital or medical center on the location and severity of injury to the cyclist.

Thomas, a past chef for bicycle superstar Lance Armstrong and current chef for US cyclist Levi Leipheimer, came up with the idea after cycling for hours alone recreationally. “Being around such a beautiful yet dangerous and individual sport for years led me to the ‘Aha!’ moment,” he said.

Even if your bike helmet looks normal, it could be harmed by minor structural problems that could render the helmet ineffective in a serious bicycle accident. That’s what led the Fraunhofter Institute for Mechanics of Materials to develop a brilliant way to determine when it’s time to buy a new, more secure bicycle helmet: make it stink. Not all the time, of course, but the new helmet is packed with stinky chemical capsules that are released when the helmet’s shell deteriorates. The smell leaves cyclists with no choice but to bite the bullet and buy a new helmet.

Tired of throwing your hands out every which way to indicate which way you’re turning while cycling in the city? Well Blink has a helmet design solution for you. The helmet works exactly like car turn signals, in that other drivers, pedestrians and cyclists can determine which way you intend to turn just by seeing which side of your head is lighting up. To turn left, the cyclist just taps the turn light on the left side of his or her head. To turn right, he or she taps the right turn signal. To turn the signals off, the cyclist simply taps again after the intersection.

The design, which won an award at the 2010 Seoul Cycle Design Competition, is a brilliant concept with some clear drawbacks. First of all, since drivers and pedestrians currently expect hand turn signals from cyclists, they’re not likely to notice this high-tech helmet. And the turn signals are so small that they could be difficult to view from many angles, leading cars and pedestrians unable to tell which way the cyclist will turn. Still, the Blink design is a great idea that could really take off with a few improvements.

Distracted driving among vehicle drivers has been a hot topic recently. Since the dangerous practice kills nearly 6,000 drivers and injures 500,000 each year, Secretary of Transportation Ray LaHood has made eliminating distracted driving a key focus. But distracted driving is also a serious problem for bicyclists. For this reason, California Senator Joe Simitian has included cyclists in his plan for increased distracted driving penalties. “The cycling community is of mixed minds on this,” said Simitian, noting that many cyclists don’t want to face additional fines. But, he says, “common sense tells us it’s not a safe habit, given all the risks that cyclists have to contend with.”

The best strategy to combat distracted driving and distracted cycling is just to turn off your phone while in transit. A number of cell phone companies and safety advocates have developed cell phone apps that prevent distracted driving by blocking incoming calls and texts and replying with an automated message that the driver or cyclist is in transit and will reply when they reach the destination safely. This is a great, low-cost way to cut down on distracted cycling and make the roads safer for drivers, cyclists, and pedestrians alike.

Wouldn’t it be great if cars and trucks knew when cyclists were approaching a busy intersection? That’s a distinct possibility based on research developed by the city of Copenhagen, Denmark. As a test project, the city equipped 300 bicycles with R-fid chips on the handlebars which sent out radio frequencies while approaching an intersection. When the radio frequency is received, an illustration illuminates under the “walk” and “don’t walk” signals to notify drivers that a cyclist is near. Supposedly, this will coax drivers into watching out for cyclists and pedestrians.

All of the technologies mentioned above could greatly improve traffic safety by preventing serious head injuries, reducing distractions, and increasing road awareness. But when it comes to reducing bicycle accident injuries, the best solution is always to keep a “share the road” attitude, obey all traffic signs, and wear a helmet. Be safe! And enjoy National Bike Month.