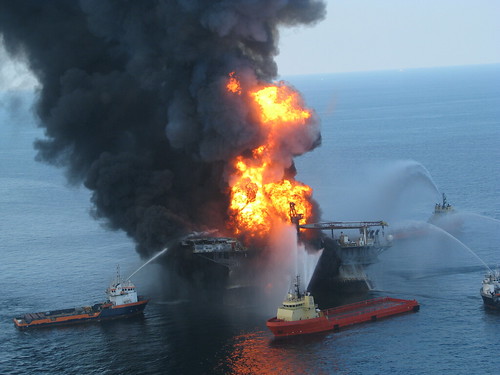 There’s no point in letting BP take all the blame for the Deepwater Horizon oil spill. Since the oil rig exploded more than two months ago, Texas-based petroleum company Anadarko has stayed mostly under the radar, letting BP sink slowly into infamy. But just when the world needed a new villain, the 25 percent owner of Deepwater Horizon surfaced when it attempted to distance itself from BP and legal liability.

“The mounting evidence clearly demonstrates that this tragedy was preventable and the direct result of BP’s reckless decisions and actions,” said Anadarko CEO Jim Hackett in a statement last week. “BP’s behavior and actions likely represent gross negligence or willful misconduct and thus affect the obligations of the parties under the operating agreement.” (emphasis mine)

As TPMmuckraker’s Rachel Slajda notes, use of the phrase “gross negligence or willful misconduct” is very intentional. But, needless to say, BP doesn’t expect to shoulder all the responsibility for the spill. “Other parties other than BP may be responsible for costs and liabilities…We expect those parties to live up to their obligations,” a BP spokesman told TPM.

In a word, this is going to get messy. As we’ve written before on the GJEL blog, the BP oil spill has set off a bevy of tough class action lawsuits claiming injury and economic damage in the months following the spill. And even before Anadarko jumped into the mix, defendants and plaintiffs waged a turf war, each side attempting to get a “home court advantage.” BP, for example, wants the class action suits and multidistrict litigation (MDL) tried in Houston, which one Louisiana lawyer called “the epicenter of the oil and gas business worldwide” where “almost every one of those judges there would be related in some way to the oil industry.” Meanwhile, plaintiffs continue to push for New Orleans, which has suffered the vast majority of the spill’s damage and could be more sympathetic to victims.

Thanks to its 25 percent ownership of Deepwater Horizon, Anadarko would have surfaced as a potential defendant sooner or later. But unless the company can prove that BP is responsible for all of the “gross negligence or willful misconduct” that contributed to the spill, Anadarko will become another public punching bag in addition to jumping feet first into the legal firestorm about to engulf BP.