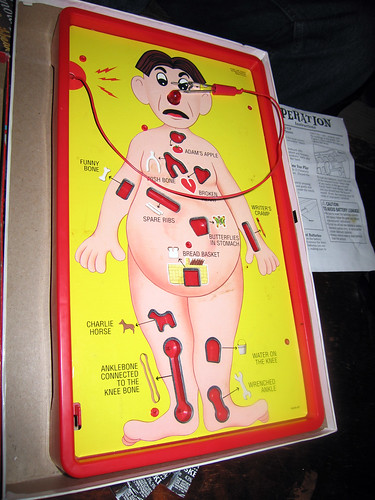 That old Operation game has come to life, to the detriment of an abnormally high number of patients at California hospitals. In the past two years, doctors have left surgical instruments inside patients after their operation 350 times. Such faux pas are called “never events” because they are never supposed to happen. But in reality, “retained foreign objects” incidents account for 14 percent of all preventable hospital errors and are running up the bill on penalties and legal fines statewide.

Last week, we wrote that California health officials had cited a handful of state hospitals, including the Bay Area‘s Marin General Hospital and Alameda County Medical Center, that were falling short of safety standards. In the past three years, officials have penalized 108 hospitals and charged $4.8 million in fees. Each administrative penalty costs hospitals $50,000, $75,000 and $100,000 depending on the frequency of the event.

The state hopes to use the recovered funds to reduce preventable errors. About $800,000 of the fines will go to programs that promote better safety standards. “We really want to drive change. Penalties are one way of driving this change,” said Kathleen Billingsley of the state’s Center for Health Care Quality.

But penalty critics say they are unnecessary and even unfair. “This was a very unfortunate incident and, whether or not there was a fine involved, we would have addressed this very seriously,” said Dr. Todd May, chief of the medical staff at San Francisco General Hospital. Mark Kadzielski, a lawyer representing hospitals that have appealed the penalties, said they are “unfair and unsettling to hospitals” because there is no statute of limitations, meaning a medical center could be sued for an accident that happened at any point in the past.

Whichever side of the debate you fall on, everyone can agree that it’s in all of our best interest to avoid getting surgical equipment left inside our bodies after an operation. If the fines bring down the frequency of such preventable accidents, I doubt anyone will complain.