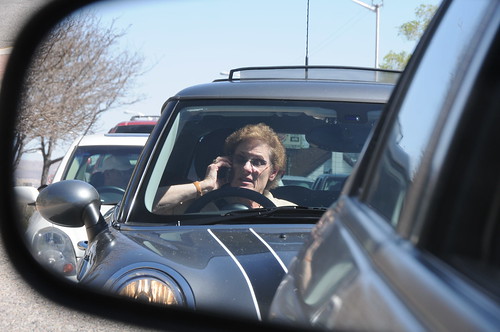 It’s a big week for raising awareness about the dangers of driving while distracted. On Friday, AAA and Seventeen Magazine teamed up with the Department of Transportation to urge teenagers to take two seconds to turn off their cell phones before getting behind the wheel. And tomorrow, Transportation Secretary Ray LaHood will host the second annual Distracted Driving Summit in Washington DC. LaHood has been a tireless advocate against distracted driving, and I hope this month’s events will contribute to the movement to make distracted driving as taboo as drunk driving and ignoring seat belts.

In 2008, distracted driving killed more than 6,000 and injured more than 500,000. Friday’s event was geared toward emphasizing this statistic and relating the ease of taking two seconds to turn off the phone before getting behind the wheel. “Taking your eyes off the road for two seconds doubles your risk of a crash or near-crash,” said AAA vice president Kathleen Marvaso. “National Two-Second Turnoff Day is an opportunity for young drivers nationwide to take control of their own safety behind the wheel by making the wise and responsible decision not to drive while distracted.”

AAA also unveiled some helpful tools to discuss the dangers of texting or typing while driving, including StartSmart, an interactive program detailing the dangers when a teenager learns how to drive, and a feature on MonkeySee.com, with eight videos on common distractions for new drivers. In this vein, GJEL has compiled a list of technological devices to help people ignore distractions and drive safer.

Friday’s event has serious potential because it’s goal is to impact driver behavior and legislation long term. “AAA hopes that [Friday’s] events are a springboard for further engagement and discussion on the topic of distracted driving,” said Marvaso. “Through our campaign to enact bans on texting while driving in all 50 states and other public outreach initiatives, our association has made distracted driving prevention and education a top priority.”

That’s where Secretary LaHood and his distracted driving summit comes in. Tuesday’s event promises to bring transportation officials, safety advocates, and lawmakers, including Labor Secretary Hilda Solis, and Senators Jay Rockefeller and Amy Klobuchar, together to discuss substantive ways to make the roads safer for drivers. “One year after our first national Distracted Driving Summit, we will reconvene to take stock of our progress and reassess the challenges and opportunities that lie ahead,” said LaHood in a statement. “I look forward to hearing insights from our distinguished panelists and guests, and know that by working together, we will save lives.”

We’ll update you on any developments that come out of tomorrow’s summit.