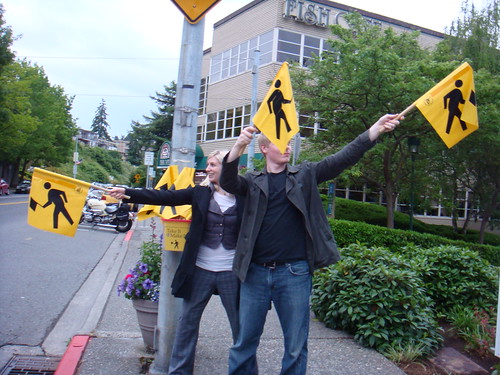 In the past year, public opinion has nearly coalesced around the fact that distracted driving is dangerous and should be eliminated. But what about distracted walking? A new law proposed in New York that would outlaw the use of electronic devices for pedestrians, including runners, has ignited the debate about distractions and whether the government should step in, even to reduce pedestrian accidents.

Last spring, I spoke with California state senator Joe Simitian, who had proposed a law that would impose penalties for distracted cyclists. When asked if this type of law could lead to more restrictions, including bans for distracted walking, Simitian said that outcome was unlikely. But Anne Teigen of the National Conference of State Legislatures suggested that the progression was inevitable. “The big thing has been distracted driving, but now it’s moving into other ways technology can distract you, into everyday things,” she told the New York Times.

Last week, the Governors Highway Safety Association reported that for the first time in four years, pedestrian accidents increased slightly in 2010 over the year before. “Both drivers and pedestrians are increasingly distracted by cell phones and other portable electronic devices,” the report offered as an explanation. “Anyone who travels in a busy city has seen countless pedestrians engrossed in conversation or listening to music while crossing a busy street,” added GHSA Chairman Vernon Betkey Jr.

Even proponents of distracted driving laws have criticized the new proposed laws as going too far, saying drivers and pedestrians should accept personal responsibility for avoiding accidents. “I think it’s an infringement on personal rights,” Marie Wickham told the Times. “At some point, we need to take responsibility for our own stupidity.”

Simitian has also voiced concerns that the new law is too expansive, even compared to his distracted cycling law. “Is there a problem out there with distracted pedestrians? I’d be the first to acknowledge it,” he said. But “it’s appropriate to distinguish between 4,000 pounds of steel and glass coming at you and a pedestrian who may well put themselves at risk but probably poses less of a risk to the general public.”