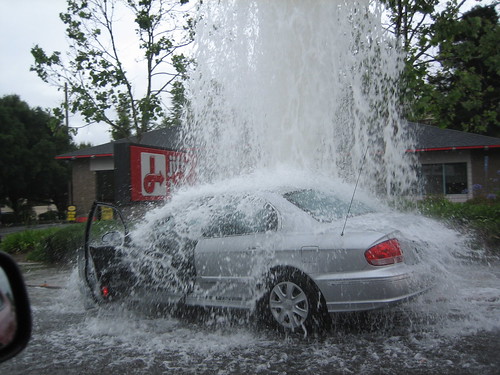 California is broke, and with budgets stretched thin across the board, it’s difficult to make an effective argument for increasing spending, even if the result is increased safety on California streets to save lives. But a recent Centers for Disease Control and Prevention report found that California is responsible for a full 10% of the nation’s car accident medical and work loss costs. With California car accidents costing far more than any other state, it’s clear that California could actually save money by spending money on infrastructure improvements to reduce accidents.

The CDC report found that of the $41 billion in medical costs in 2005, California was responsible for about $4.16 billion, far more than the second most expensive state Texas at $3.50 billion. In some respects, California has already been proactive about improving safety for drivers, cyclists and pedestrians. In San Francisco, for example, the Municipal Transportation Agency has installed green “bike boxes” to improve bicycle visibility and stop preventable bicycle accidents. And last week, the SFMTA approved a $20 million plan to decrease speeds on Masonic Avenue following a string of disturbing pedestrian accident deaths.

But some safety advocates say that these measures are too reactive, and that the state is only willing to pay for infrastructure improvements following accident deaths, rather than preventing them in the first place. To appease these critics, California and cities like San Francisco should implement similar plans on high-traffic roads throughout the city, rather than focusing solely on busy intersections or roads as symbols for the city’s accident death problems.

But with budgets tight, any improvement should be lauded. And if the Masonic Avenue Boulevard Plan is successful, it could serve as an important blueprint for reducing car accident and pedestrian accident deaths throughout the city and state. So if it’s duplicated effectively, California could reduce its car accident costs and save the taxpayers a bundle.