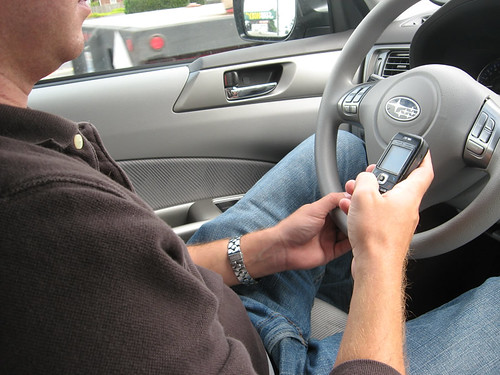 In July, Iowa joined the 30 states that have boosted highway safety by enacting laws against distracted driving. Iowa police cannot impose fines on drivers who disobey the law until July of 2011, so until then, the Wall Street Journal reports, the state’s police have come up with a creative alternative: passing out neon bands with the words “TXTING KILLS” for drivers to wear on their thumbs.

The state has already distributed 30,000 bands at community events and high school football games, and plans to order another shipment of 30,000. “A lot of people want them for their kids,” said Courtney Greene, a spokeswoman for the state’s Department of Public Safety. “It’s a fun way to get across a serious message about not texting and driving.”

Last year, the dangerous practice killed 6,000 drivers and injured more than a half million more, according to the National Highway Traffic Safety Administration. Though a nationwide law against the practice has stalled in Congress, Secretary of Transportation Ray LaHood has been a vocal supporter of laws against texting behind the wheel. “The simple fact is that texting and talking on cell phones behind the wheel is a deadly epidemic,” wrote LaHood on his blog earlier this year. “To suggest otherwise is to put your head in the sand. To spend considerable resources to suggest otherwise is a glaring waste.”

Another popular way to persuade teenagers not to text while driving is for parents to write up a safe driving contract with their children. We’ve created a template contract for parents and teenagers that creates guidelines for subjects ranging from distracted driving to obeying all traffic signs. A number of insurance companies and the Center for Disease Control have also endorsed this strategy. “It’s a way for parents and teens to engage with each other and agree on what the consequences are,” said Arlene Greenspan, a senior scientist at the Injury Center of the CDC. “Writing it down clarifies for everybody what the rules are.”

This week, National Teen Driver Safety Week, the statistics speak to the importance of taking any chance to cut down on distracted driving. Creative police tactics like Iowa’s TXTING KILLS campaign and parent-teen driver contracts are promising first steps toward the long-term goal of making distracted driving as taboo as driving under the influence and neglecting to wear seat belts.