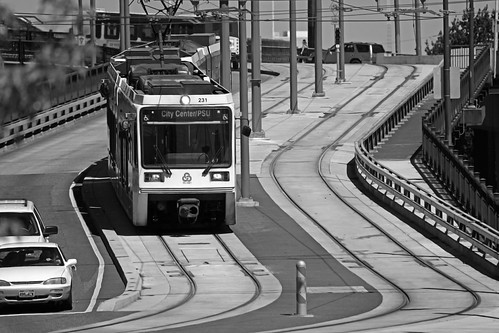 For pedestrians, getting hit by a bus is one of the worst thoughts imaginable. We’ve written before about Muni accidents here in San Francisco. But right now, due to a string of injuries and fatalities, Portland’s TriMet bus system is under the radar of safety advocates. The Oregonian reports this week that, although left-turn accidents are “alarmingly common,” the system is resisting a “no-left” policy.

Ordering busses not to turn left may sound like an extreme fix to the recent accidents. But for programs in Des-Moines, Iowa and Cleveland, Ohio ordering bus drivers to avoid left-turns and honk before turning right have been incredibly successful. Cleveland’s Regional Transit Authority, for example, used to report three to four pedestrian accidents each year. But since adopting the new policies in 2003, there hasn’t been a single pedestrian incident. Still, TriMet officials remain unconvinced, saying the policy would be “functionally infeasible” due to the abundance of one-way streets in Portland. And the honk-before-turning policy has been criticized for implying “that bus operators should rely on the horn instead of their awareness of pedestrians.”

Recent victims have endorsed the no-left and right-turn honking policies. Gloria Manon, for example, says she would not have been struck by a No. 19 bus in early April if it had honked. But her bruises are small potatoes compared to the worst TriMet accidents. On April 24, for example, a No. 9 bus collided with five pedestrians in downtown Portland. Danielle Sale, 22, and Jenee Hammel, 26, were killed.

Patricia Ann Smith, a 68-year-old woman whose leg was run over by a left-turning TriMet bus in 2008 has some clear advice for the city: “They need to deal with this problem.” Smith was walking her dog across the street — the walk signal said go — when a bus turned left on a green light, brushing the dog and crushing Smith’s leg. TriMet admitted fault and settled to the tune of a record $1.5 million in damages. The firm representing Smith, Paulson Coletti Trial Attorneys, wrote on their blog today that while they’re pleased with the settlement, Smith’s injuries are serious: her leg was amputated and it has been difficult to find a prosthetic fit.

Pedestrians and cities alike should do everything they can to avoid tragic accidents like those in Portland and San Francisco in past months. For walkers and bikers, that means being especially careful while zooming around downtown. For city officials, it means embracing any policy that can reduce injuries and save lives, even if that means banning left turns.

UPDATE: After a flood of criticism of TriMet’s refusal to change its transportation policies, the agency introduced changes that would make bus routes safer. The changes included reducing, though not eliminating, left turns, and discontinuing some of Portland’s most dangerous bus stops.