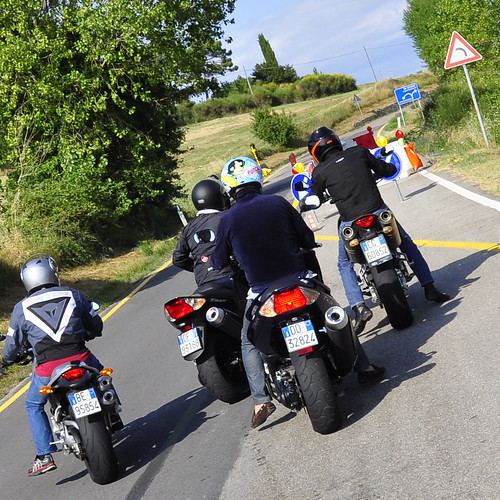 We’ve been writing a lot about National Bike Month. The cycle-centric holiday, hosted by the League of American Cyclists, has placed a large emphasis on increasing ridership and teaching safe cycling behavior to children. And here in California, Sacramento has launched a major monthly program to reduce bicycle accidents. But May isn’t only National Bike Month, it’s also Motorcycle Safety Awareness Month. Boosting motorcycle safety is essential, especially considering that motorcycle deaths make up a disproportionate 13.2% of all traffic deaths nationwide. So in addition to watching out for bicycle safety this month, stay aware of motorcyclists, and as always, share the road for everyone.

While vehicle accidents have dropped, last year to the lowest number since the Truman administration, motorcycle accidents increased 131 percent between 1998 and 2008, according to the National Safety Council. “Throughout spring and summer the number of motorcyclists on the road will increase. It is important for both motorists and motorcyclists to be aware of one another,” said NSC Senior Director of Transportation Initiatives David Teater. “To better defend themselves, motorcyclists should follow the rules of the roadway and wear protective gear, including a Department of Transportation compliant helmet.”

But regardless of your state’s motorcycle helmet laws, the NSC has some pointers for both motorists and motorcyclists:

So if you drive or ride a motorcycle, be sure to follow these suggestions. And while you’re here, take 2 minutes to fill out our helmet behavior survey.