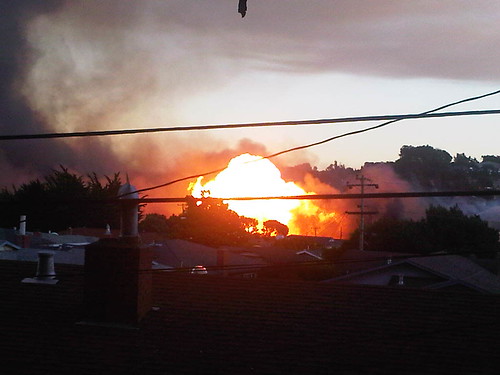 Jessica Morales was watching Thursday Night Football at her boyfriend’s house in San Bruno when a pipeline explosion resulted in the deaths of Jessica and seven other San Bruno residents last September. This week, Jessica’s parents filed a wrongful death lawsuit against California’s Pacific Gas & Electric, saying the company knew the pipeline was at high risk and did nothing to prevent the looming explosion.

“They had a legal and moral duty to do things in a proper manner and they failed to do so,” the family’s lawyer said of PG&E. Information that has arisen in the months since the tragic explosion has mostly supported this claim, as state and federal regulators have repeatedly criticized PG&E’s record keeping and safety procedures. Last week, for example, the San Francisco Chronicle reported that PG&E routinely spiked pressure on gas lines to the maximum level since 2003, making an explosion more likely.

The San Bruno pipeline, for example, regularly operates at a pressure of 375 pounds per square inch, but PG&E increased that to 400 pounds per square inch – the federal limit – in 2003 and again in 2008. “It’s backward in its thinking – you wouldn’t think anybody would be that reckless,” said pipeline safety expert Richard Kuprewicz. “The overall intent of the (federal inspection) program was, you are not supposed to look for loopholes.”

Even this week, PG&E has announced that it cannot find a crucial document related to the San Bruno pipeline explosion that could help other gas pipelines improve safety. This led National Transportation Safety Board chairwoman Deborah Hersman to voice a harsh rebuke of PG&E. “In the years since the pipe was put into service, decisions regarding inspections, operating pressures and risk management plans were all based on facts that were just plain wrong,” she told a gathering of policymakers in Washington DC Wednesday.

PG&E’s missteps in the years leading up to the San Bruno pipeline explosion and the months since are unfortunate, at the very least. Perhaps increased scrutiny moving forward, in addition to justice for families like Jessica’s, will lead to safety procedures for gas pipelines and other services.