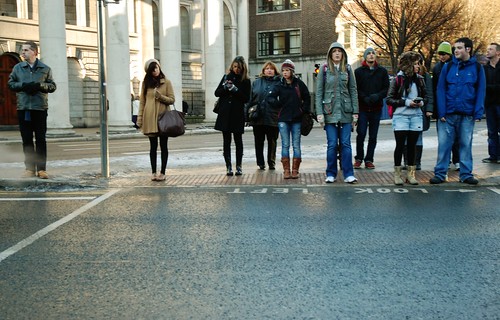 At a meeting in San Francisco late last week, the city’s pedestrian advocacy organization WalkSF met with members of the Board of Supervisors to brainstorm methods to best reduce bicycle accidents. 800 people are hit in pedestrian accidents each year on San Francisco streets, a number the organization hopes to reduce. Although the city released a pedestrian safety study last month, it has widely been criticized for failing to include an action plan detailing how to achieve significant and lasting results. Last week’s meeting appears to be a first step toward locating such an action plan.

Supervisor David Chiu was vocal about the need for safer streets. “What I committed to [advocates in my district] is that in the very first meeting of our County Transit Authority next year, I am going to be calling for a study of what our city has been doing in the area of pedestrian safety to coordinate the efforts to not just think of this not just as a transit issue, but as a public health issue,” he said.

WalkSF has reason for the spring in its step, reports StreetsblogSF. Voters approved Proposition AA this year, which includes more funding for San Francisco city streets, and WalkSF also made a recent agreement with CityPlace retail center to work toward safer streets. It is also notable that neighborhoods within San Francisco have started to develop their own safety plans, apparently rejecting the relatively weak city plan. Chinatown, for example, unveiled a detailed Pedestrian Safety Needs Assessment and related Safety Plan late last month that would put more than $20,000 toward 21 of the neighborhood’s most dangerous intersections.

WalkSF executive director Elizabeth Stampe smartly picked up on an increasingly common gripe among San Francisco pedestrians and cyclists: the tendency to blame these two-footed and two-wheeled commuters for pedestrian accidents. This comes as California lawmakers statewide consider boosting pedestrian and bicycle safety laws, including a three-foot passing radius for cars zooming by bicycles. “We’re trying to change the conversation from being about blaming the pedestrian and more into sharing the streets and getting folks to recognize that people who are driving have more responsibility,” she said.