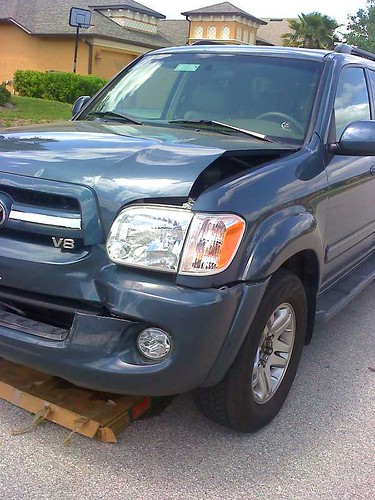 Toyota’s in damage control mode. Feeling the backlash from their delayed recall of  on vehicles with faulty brakes, the company now seems to be pulling any model with reported safety issues, whether or not they’ve caused accidents, injuries, or deaths. Toyota announced today that it will add 50,000 2003 Sequoia SUVs to its list of recalled vehicles to fix stability control issues that arise when accelerating from a stop. Knowing that the public relations damage has already set in, the company is taking steps to emerge as a leader in auto safety.

Toyota has received 96 reports of the acceleration problem that has so far caused no injuries or accidents. In a statement, the company said that “in vehicles without the upgrade, the VSC system could activate at low speed (approximately 9 mph) for a few seconds after acceleration from a stopped position and, as a result, the vehicle may not accelerate as quickly as the driver expects.”

It’s certainly better for the company to be careful when it comes to any safety issue. But I can’t help but wonder whether Toyota’s continuing list of safety recalls is part public relations. Call it the Domino’s defense. Last year, the ubiquitious pizza delivery chain released ads (“The Pizza Turnaround“) saying they changed their recipe, admitting what everyone already knew: that their pizza was crap. The idea was that people would trust the new recipe’s quality because of the bold admission. In a similar vein, Toyota seems to be embracing the opportunity to emerge as a company that has learned from its mistakes and now sees safety as its first priority.

The federal government continues to come down hard on Toyota. Last week, National Highway Traffic Safety Administration announced that it would fine Toyota $16.4 million,the maximum penalty possible and the highest ever sought. And feds are currently investigating whether an accident involving a 2002 Toyota Highlander that killed four was caused by acceleration issues. The company has recalled the 2008-2010 versions of that model. “Toyota sympathizes with the individuals and families involved in any accident involving our vehicles,” Toyota said in a statement.