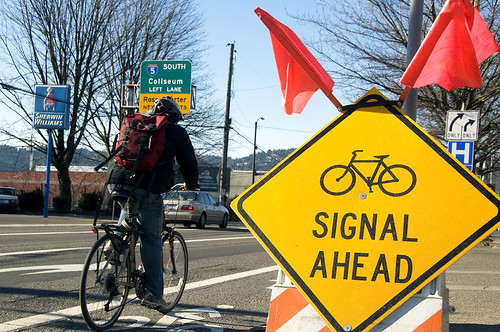 There’s no doubt that National Bike Month has been a resounding success here in California. The extended May cycle-centric holiday has led to major safety campaigns statewide. But the preparation for last week’s Bike to Work Day has been the month’s crowning achievement, as Streetsblog reports that the day of events was preceded by unprecedented growth in California bicycle infrastructure. This is a great start, and bike safety advocates are not likely to stop there. Below are five great ideas to improve bicycle safety laws and infrastructure moving forward. Leave your ideas in the comments section or on our Facebook page.

The California state legislature is months away from passing a law that would require vehicles to leave a three foot passing lane near cyclists on city streets and highways, and to reduce their speed to 15 miles per hour. If the bill passes, it will be a major win for bicycle safety advocates, who say that vehicles that pass too close at fast speeds could destabilize the cyclist and even cause a bicycle accident. Though motorists should take additional measures to increase bicycle and pedestrian awareness, the 3-foot passing bill is a big step in the right direction.

Los Angeles Councilmember Bill Rosendahl is commonly cited as a proponent of the 3-foot passing law, saying last year that the law was “long overdue” here in California. But the idea has welcomed widespread support from the City of Los Angeles, the California Bicycle Coalition, and State Senator Alan Lowenthal, who introduced the bill earlier this year.

Earlier this year, the San Francisco Municipal Transportation Agency began implementing “bike boxes” to improve bicycle safety on Market Street, which the San Francisco Bicycle Coalition calls the busiest bike street west of the Mississippi. The green bike boxes are designed to let cyclists rest in front of motor vehicles at traffic lights, improving “the visibility and positioning of bicyclists at intersections with traffic signals and to prioritize bicycles as they move through intersections,” writes the SFMTA.

The bike boxes essentially build on the safety success of bike lanes on the city’s busiest streets. Bike boxes have been endorsed by a variety of bike groups and city officials, including the SFBC and San Francisco Mayor Ed Lee. The boxes have been proven so successful that the SFMTA rushed to install them throughout Market Street before Bike to Work Day last week.

Masonic Avenue bicycle accidents have received a lot of press recently due to an uptick in bicycle and pedestrian deaths and injuries. In less than a year, 2 people have been killed by drunk drivers and many more have been injured. Earlier this month, 61 year-old James Hudson of San Francisco was killed, and since that accident, Masonic Avenue has been the location of two major car accidents.

Part of the problem is the width of Masonic Avenue, which makes motorists feel comfortable exceeding the 25 miles per hour speed limit. That’s why a “who’s who” of San Francisco safety advocates and lawmakers have endorsed the $20 million Boulevard plan to improve pedestrian and bicycle safety on Masonic Avenue. Last Friday, the San Francisco MTA met to discuss the proposal and other methods to improve safety on Masonic and throughout the city.

This is perhaps the most controversial bicycle safety proposal, since a large faction of the bicycle community opposes it. “Helmets are not required for driving or walking – both activities arguably with similar or greater injury risk than that of bicycling,” wrote Joe Linton of the L.A. Bicycle Advisory Committee, adding that helmet laws lead to fewer cyclists.

But following his serious bicycle accident last year, L.A. Mayor Antonio Villaraigosa called for a statewide bicycle helmet law in California. Despite the unpopularity of this law amongst much of the bicycle community, it would significantly improve bicycle safety, since wearing a helmet reduces the risk of serious head injury by 85 percent. But while some states, including California and Oregon, require helmet use for children, no state has implemented a blanket helmet requirement. Imposing such a law would solidify California as a solid bicycle safety state.

You probably already knew that distracted driving isn’t only a problem for motorists. Lawmakers in New York City have even proposed a law to combat distracted walking. But here in California, State Senator Joe Simitian has taken aim at distracted cycling by proposing an increase in fines along with a vehicle distracted driving law. “Common sense tells us it’s not a safe habit, given all the risks that cyclists have to contend with,” Simitian told Streetsblog last year.

But like helmet requirements, the distracted cycling proposal is unpopular among many cyclists, who contend that motorists are responsible for the majority of bike-car accidents, despite often getting off the hook. To a certain extent they are right: distracted driving has been proven to be more dangerous for motorists than any other traffic demographic. But everyone will benefit if motorists, cyclists and pedestrians alike agree to put down their phones while zooming down city streets and highways.