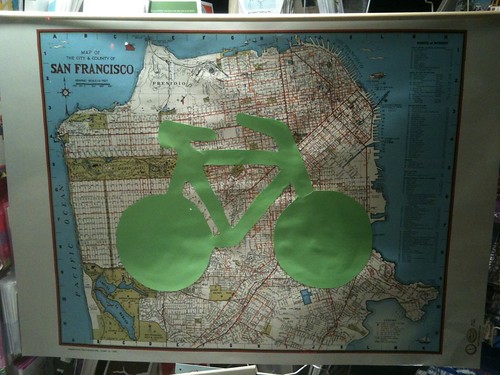 It’s no secret that biking on San Francisco’s Oak and Fell streets can be incredibly dangerous. In fact, the cross-town city arteries have proven dangerous for motorists as well, as emphasized by last week’s fatal big rig accident at the corner of Oak Street and Octavia Boulevard. To heal this problem, the San Francisco Municipal Transit Agency has developed a plan to make these streets safer for motorists and cyclists alike by adding cross-town bike lanes. But this comes with a catch that could derail the plan altogether: the proposed bike lanes would replace a full lane of moving traffic or parking spaces, which some San Francisco residents have deemed unfeasible.

A story co-published by The Bay Citizen and The New York Times reports that the SFMTA’s plan could have erred in putting significant thought and resources into the new cross-town bike lane plan without consulting city residents. Failure to gauge public opinion has spoiled past bike-friendly initiatives in San Francisco. Earlier this month, for example, the Mayor’s office halted construction of bike lanes on Cesar Chavez Avenue after years of planning because city businesses protested that the “road diet” would harm industrial companies along the high-traffic truck route.

It’s true that removing a lane of vehicles to make way for bicycle lanes could lead to more traffic on San Francisco’s Oak and Fell Streets. But the number of San Francisco cyclists rises each year, and studies have repeatedly shown that bike lanes lead to safer streets for motorists and cyclists alike. A new report by the journal Environmental Practice, for example, found that California cities with the highest bicycle rates boasted the lowest fatality rates. In fact, major bike cities, like Davis California and Portland Oregon, report an average of 2.5 fatalities per 100,000 residents compared to 9 deaths per 100,000 in cities with a small population of cyclists.

SFMTA spokesman Paul Rose said the agency will spend $165,000 on an “extensive public outreach campaign” to raise awareness about the proposed bike lanes. But this is likely to remain a hot topic, as some 2011 bike accidents have ignited animosity among San Francisco cyclists and motorists. But SFMTA planner Mike Sallaberry told StreetsblogSF recently that he was “pleasantly surprised by how there’s not a ‘no way, this is crazy, don’t do it’ feeling out there.”

So despite the potential drawbacks for San Francisco traffic and parking, there’s a chance that we’ll see bike safety improve as the city implements cross-town bike lanes on Oak and Fell streets. Stay tuned.