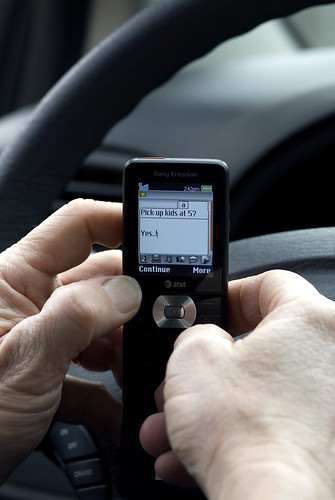 Reacting to the growing public denunciation of distracted driving and consumer distrust of the auto industry following Toyota’s massive worldwide safety recall, an auto safety overhaul is moving rapidly through Congress. Last week, the Senate Commerce Committee voted to pass a bill that, after debate and compromise, has earned the support of consumers and automakers.

Initially, conservatives worried that the overhaul would deny individual states the right to punish or reward auto companies for their safety failures or achievements. Senator Jim Inhofe (R-OK), for one, announced earlier this year that he opposes “a one-size-fits-all Washington solution on all states…that withholds highway funds from states that do not enact specific laws.”

While one bill being considered would have denied certain highway funds for states without distracted driving laws (penalties that currently exist for seat belt and drunk driving laws), the most popular option would boost highway funding $94 million each year for states that agreed to comply with additional safety laws. “States are the best places to have this type of legislation passed, and our bill does respect state rights,” said Kay Bailey Hutchison, the commerce committee’s top Republican.

In addition to rewarding states for anti-distracted driving laws, the auto safety overhaul would require auto companies to install event recording systems, “black boxes”, in every new vehicle, and raise the fine for safety oversight from $16.4 million to up to $300 million. The Alliance of Automobile Manufacturers, which supports the legislation, has opposed certain elements, like the black box requirement, saying it would drastically increase the cost of new cars. The Alliance, which includes GM, Toyota, and a handful of other major auto companies, also says that the legislation won’t end safety problems. “We can’t prevent a shoe from going under a pedal. We can’t prevent people from putting in more than one floor mat,” said a spokesperson. “Prevention becomes a very steep hill to climb.”

Most safety advocates and lawmakers brush such statements aside, acknowledging that it’s in everyone’s interest to make drivers safer. But opponents have scored a few notable victories in terms of timeline for the legislation. Early drafts of the bill required that the increased safety standards be implemented by 2014. The Washington Post reports that this provision has been stripped from the bill, which says that a deadline will only be implemented if the Secretary of Transportation deems it necessary.

Even though the safety overhaul and distracted driving legislation has been softened, it’s a step in the right direction and will make car companies more careful about the products they release to consumers, and drivers more safe behind the wheel.