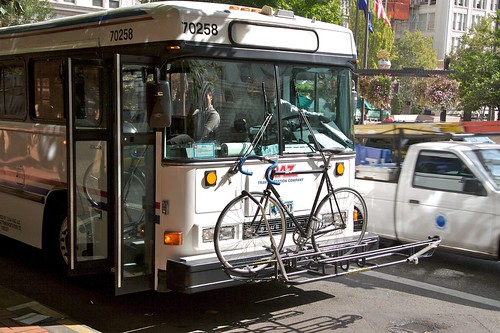 Fired Trimet driver Sandi Day was found guilty last week on three counts including careless driving that led to the death of two pedestrians and serious injury of three others last April. Announcing the conviction, Judge Stephen Bushong said he felt sympathy for Day, who has expressed severe remorse for the bus accident, but that she was at fault since “the pedestrians were there to be seen.”

Day faces more than $1,000 in fines, 200 hours of community service, and a traffic safety course to be completed within the year. Though she did not claim to be innocent, Day’s attorney said the decision was too harsh because for charges of careless driving resulting in death, “the act of driving has to be both negligent and dangerous,” which he said had not been proven after five days of witness testimony.

This argument was not successful, likely because more than a dozen witnesses saw the pedestrians enter the crosswalk. “They were doing nothing wrong and everything right,” said Chuck Sparks, the county’s deputy district attorney. “She was the captain of the ship. She was in charge of that bus. She has to make sure what she does is safe.” The court agreed with this argument, but acknowledged that Day’s actions were not intentional and cleared her of criminal charges, meaning she will likely keep her commercial driver’s license.

San Francisco’s public transportation agency has recently faced criticism for its lax treatment of drivers consistently involved in preventable bus accidents. In 2010, a recent report found that there were 379 preventable bus accidents which involved 348 bus drivers. Of those, four drivers had three preventable accidents, 23 had two, and 321 had one. Still, the report found that the San Francisco Municipal Transportation Agency is only considering firing seven drivers.

Back in Portland, family of the victims of last April’s bus accident were largely sympathetic toward Day. “She will obviously live with this the rest of her life,” said Vicki Flynn, the mother of one of the women who were killed. “We do not want to wish anything horrible on this woman…we forgive her.”