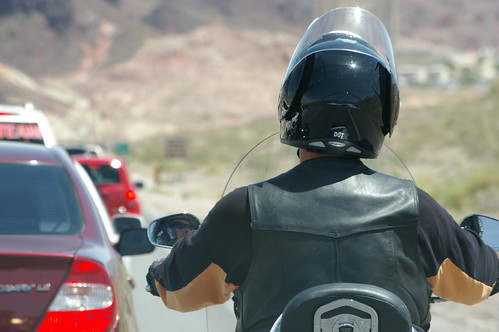 The National Transportation Safety Board is taking on a tough crowd in its effort to implement a national law requiring motorcycle helmets for all ages. The Wall Street Journal reports that motorcycle deaths “more than doubled” in the decade before 2008, a troubling statistic the NTSB blames partially on insufficient helmet laws. The most recent data, from 2008, indicates that about 65 percent of people killed on motorcycles were not wearing helmets. The agency hopes the helmet law will reverse this deadly trend.

Needless to say, the proposal has ignited a contentious debate between safety advocates and motorcyclists who don’t want to be told what to do. “People have to get outraged about this,” said NTSB vice chairman Christopher Hart. As the Journal reports, some motorcyclists don’t agree:

The Motorcycle Riders Foundation, a cyclists’ rights group, called the NTSB’s plans “disturbing.” It said the NTSB “has no regulatory ability and no law-making ability.”

Another group, Abate of Illinois, short for American Bikers Aimed Toward Education, says mandatory helmet laws violate cyclists’ personal freedoms. “We’re not anti-helmet by any means, we are pro-choice,” said Carleen Grant, a spokeswoman for the group.

The federal government has an odd history of abandoning any hint of motorcycle helmet regulation. In 1967, Congress debated withholding highway funds from states without helmet safety laws (this is the tactic employed to enforce 21 as the national drinking age). A decade later, Congress backed off, keeping motorcycle safety as a state issue. In 1976, a large number of states reduced or eliminated their motorcycle safety laws. And in 2005, Congress passed a law barring states from using federal funds to urge helmet use. For more information, see our infographic showing state-by-state motorcycle helmet laws.

Another aspect of motorcycle safety, “lane-splitting,” has also become a media focus of late, as Oregon considers whether to ban the controversial and often dangerous practice. “Lane-Splitting” is a common technique in which motorcyclists take advantage of their size and agility to weave through traffic and between cars. The practice is legal in California and a handful of other states, but has also been targeted as a cause of many motorcycle accident injuries and deaths. By banning the practice, Oregon could save lives and emergency room costs, but risk inflaming a similar debate about motorcycle freedoms.

As always, I’m in favor of small steps that motorcyclists (and bicyclists and motorists, for that matter) can take to improve safety and reduce the chances of an accident. That’s what the NTSB proposal hopes to do. I just hope it doesn’t get derailed by the very people it would help most.