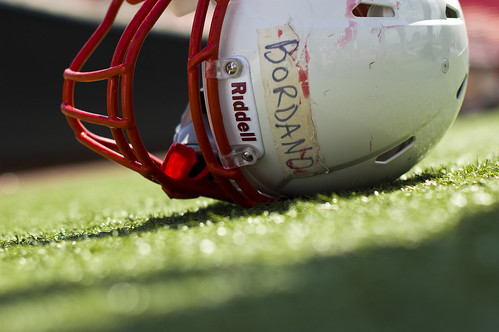 We’ve been focusing a lot on bicycle helmets on this blog over the past few weeks, but not as much on helmets to prevent other sports-related injuries. On its front page yesterday, the New York Times ran a story about the football helmet industry’s lackluster (to put it lightly) safety regulations. In fact, the story suggests that the trusted words “Meets NOCSAE Standard” on the back of helmets shouldn’t be trusted at all.

Though players, coaches, and parents have considered this an appropriate arbiter of safe helmets for decades, it turns out that the National Operating Committee on Standards for Athletic Equipment is a volunteer organization comprised mostly of representatives from the helmet manufacturers.

What’s more alarming is that there appears to be no standard for applying liability to Nocsae. ThePopTort highlights the danger for consumers and pinpoints this particularly alarming passage from the Times story:

However, “Manufacturers and schools, equipment managers and the coaches — the whole football industry — don’t want to go after or even criticize the security blanket of Nocsae,” said Sander Reynolds, Xenith’s vice president for product development. “If there’s a lawsuit, they all look to Nocsae to say, ‘Hey, see, the product met the set standards.’ They’re all ultimately on the same side when it comes to liability. Nocsae exists for two reasons — to avoid skull fractures, and to avoid liability.”

With an estimated 100,000 football-related concussions reported each year for high school players alone, it’s important that Nocsae, high schools, and state governments get proactive about implementing tougher safety laws to protect against both skull fractures and concussions. And let’s hope that it doesn’t take another string of high school concussions to jolt lawmakers into action on this issue.