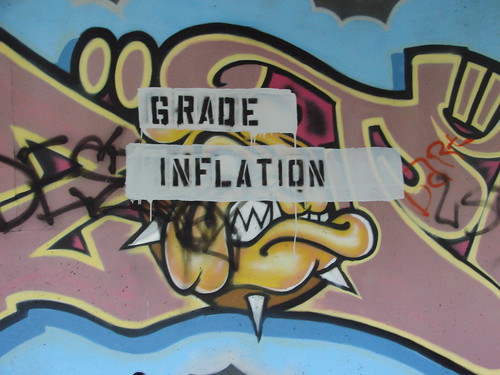 Even better than finding a $20 bill in your ski jacket! The New York Times reported on Monday that a group of law schools is inflating grades retroactively to make students “look more attractive in a competitive job market.” Over the past two years, the story explains, schools like New York University, Georgetown and Golden Gate University have bumped grades up 0.333, transforming a B- into a B, a B to a B+, and so on.

On a certain level, the urge to inflate grades is understandable. “If somebody’s paying $150,000 for a law school degree, you don’t want to call them a loser at the end,” says grade inflation researcher Stuart Rojstaczer. “So you artificially call every student a success.” But it’s still unclear whether the academic up tick will fool employers, since so many frequent the popular blog Above the Law, which keeps track of schools engaging in academic inflation through leaked student memos.

Needless to say, the Times story set off a firestorm in the legal blogosphere. Bruce Carton of Legal Blog Watch wonders what other numbers we can alter to make ourselves feel better. For example, “why should people have to wear blue jeans that say ‘Waist 38’ on them? Blue jeans marketers should deflate the size written on each pair (so size 38 now becomes 32) to make their customers ‘look more attractive in a competitive dating market.'”

On his blog Law Prof on the Loose, Jon Siegel writes that firms will not be deceived as long as Universities continue to list class rank. “You could call all the grades A, B, and C or you could call them Apple, Fire Engine, and Giraffe, and it wouldn’t matter as long as you had class rank,” he writes.

But class rank doesn’t solve the expectations problem, writes Howard Wasserman for PrawfsBlawg. Wasserman implies that some of the blame lies with the employers, who are only interested in students who are off-the-charts academically. “As a relatively new, lower-tiered school, firms are interested only in our very top students,” he writes. “But many firms seemed to say that a 3.3 GPA was not high enough for them to look at, even if that person was #3 in the class.”

Weighing the complex angles of this debate, I can’t get over Siegel’s view that when it comes down to it, grade inflation “amounts to deception.” If you want to make it more difficult for employers to judge graduates, it’s more honest to follow the example of top ten schools like Harvard, Stanford, and Berkeley, which have each implemented pass/fail systems to reduce competition without redefining As, Bs, and Cs.