Next up for Oscar Grant’s Family After Mehserle Verdict: Wrongful Death Lawsuits 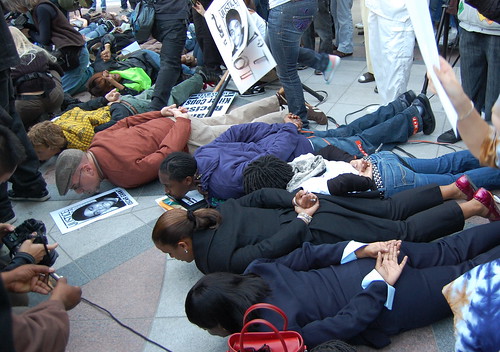 Many Oakland residents were disappointed last night by the conviction of former BART police officer Johannes Mehserle on involuntary manslaughter charges. Some who thought Mehserle should have been convicted of second degree murder or voluntary manslaughter for shooting an unarmed, handcuffed man in the head in January 2009 took the streets to protest, mostly peacefully, some otherwise.

But the jury ruled that although Mehserle was criminally negligent for shooting Grant, the evidence did not support claims that the shooting was intentional. As the San Francisco Chronicle opined yesterday soon after the Los Angeles verdict was announced, the jury would have needed to draw “conclusions about Mehserle’s state of mind that were not sufficiently supported in trial.”

This is likely the reason that Grant’s family has said that while it is “extremely disappointed” by the decision, it blames our legal system as a whole, not the jury. In August, a judge will decide how much time Mehserle will spend in jail, many estimates predict four to five years. Meanwhile, Oscar Grant’s family and girlfriend will continue to pursue multi-million dollar wrongful death lawsuits against BART.

Last year, the victim’s mother, Wanda Johnson, filed a $50 million wrongful death lawsuit against the transit agency. So far, BART has settled to pay $1.5 million on behalf of Grant’s daughter, and is still in settlement discussions with Johnson, Grant’s father, and Sophina Mesa, the mother of Grant’s daughter. Like Mehserle’s sentencing hearing, the next civil proceeding in the wrongful death suit is scheduled for August.

“The position of BART has always been that the shooting was a mistake, and now the jury has found that it was a negligent mistake,” said Dave Allen, a lawyer hired to defend BART in the wrongful death suits. “We will see if there are reasonable grounds to settle the case. Reasonable minds can find common ground.”

Grant’s family has welcomed support from peaceful demonstrators who view the verdict as insufficient justice, but has consistently denounced violent acts against policemen and the city of Oakland. On the anniversary of Grant’s death, for example, the family teamed up with BART to issue a statement calling it “a day of celebration not demonstration…a peaceful day to remember Oscar and the others who have been lost to violence.”