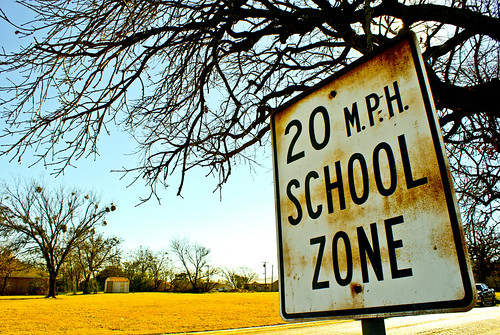 There’s no question about it: when it comes to reducing car accidents, pedestrian accidents, or bicycle accidents, states and local governments have been proposing the most interesting plans to save lives and prevent injuries. But so far, when the federal government gets involved, safety measures that often look like “no-brainers” on the local level get muddled by political ideology and Washington groupthink. This has already been the case for a federal distracted driving law and a federal teen drivers license law currently languishing in Congress. The next safety policy to be doomed by Washington policy is the Safe Routes to School program.

Safe Routes to School is a catchall organization that promotes pedestrian and bicycle safety in school zones through a variety of measures, including adding new crosswalks, and encouraging more children to walk to school along with an adult supervisor. Currently, SRTS funds are only available for projects that serve grades K through 8. Among other improvements, the new bill would extend street safety projects through high school, as long as they were paired up with middle and elementary school projects.

“In many communities, the high school and the junior high are built very close together,” said Margo Pedroso, deputy director of the Safe Routes to School National Partnership. “So if you’re putting in a mile of sidewalk, for example, to a junior high and the high school is just a quarter mile away, it makes sense to do that extra quarter mile because you can serve a larger group of kids.”

Already, too many pedestrians of all ages are vulnerable to dangerous and reckless drivers in cities. Even in tough economic times, the federal government should be very weary of programs that could make the roads even more dangerous for pedestrians and bicyclists… especially when they’re children and teenagers.