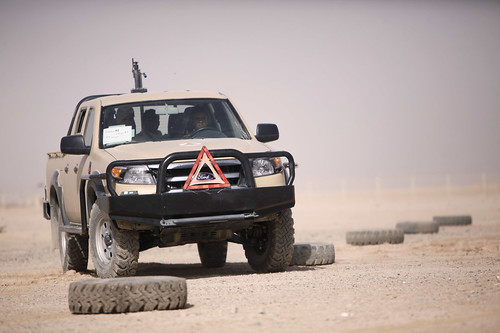 Though the amount of troops in Iraq and Afghanistan is an ever-decreasing number, the effects of a decade of war will continue to haunt America. For veterans of Iraq and Afghanistan, the scars of combat can extend to even the mundane parts of life, like driving. A new report in the New York Times highlights a growing concern in the military community about the driving ability of military veterans.
Said one veteran that the New York Times featured for the piece, ““I used to like driving. Now my family doesn’t feel safe driving with me.”The ever-present specter of roadside bombs and constant driving through urban areas that could explode in violence at any moments seems to be making combat veterans more anxious behind the wheel. This understandable reaction is becoming wide-spread enough for USAA, one of the largest insurance provider for military personnel and their families, to take notice. The agency reported that accidents for drivers who returned from deployment went up 13 percent.

This has prompted researchers in the field of psychology to initiate a number of studies about the effects of deployment on driving. Said professor Erica Stern, who is conducting research for the Pentagon, “I can’t talk with somebody who is a returned service member without them telling me about driving issues.”

At the heart of the issue is a paranoia and restlessness that causes sufferers of PTSD, even mild cases, to “view ambiguous situations as hostile.” That sense of being on guard, ironically, also seems to distract drivers from the normal driving cues like stop signs and red lights, according to one study.

So far the primary method of therapy seems to be helping veterans become aware of the situations that make them nervous, and how that affects their driving. But that can’t do much to make driving enjoyable again for veterans that associate the act with danger.

When service members sacrifice years of their lives for their country it’s heartbreaking to see even simple pleasures of their lives tainted by war upon their return. Hopefully the researchers now at work will be able to design methods to ease the stress of driving for those who seek it.

It should be mentioned that veterans close to the Bay Area can be involved in one such study being conducted at the Veterans Affairs Palo Alto Health Care System by Dr. Steven Woodward.

Here’s hoping that researchers like Dr. Woodward can find ways to ameliorate the stresses of driving for our veterans.