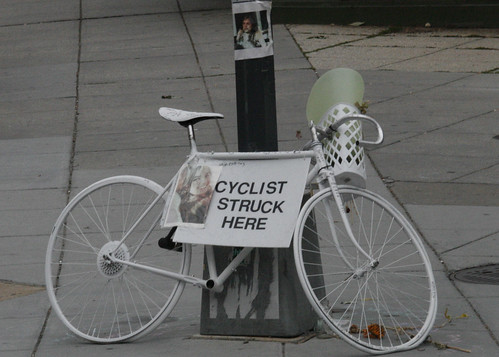 When the New York Times announced that it devote a section and webpage to Bay Area news, residents were ready to step into the national limelight. Few predicted that the Bay Citizen would have a large impact on the area’s perception of public safety, but new report and interactive map titled “Pedalers in Peril: San Francisco’s Most Dangerous Streets for Cyclists” includes overwhelming data and analysis of bicycle accidents in San Francisco over the past two years, showing the Bay Citizen can be both a source of reputable news, and an important safety resource.

In addition to a spiffy interactive map showing the hot spots for bike accidents throughout the city, the Bay Citizen released detailed information on neighborhoods, causes, and who’s to blame, often packaged with a sense of humor that is both funny and aware of San Francisco’s unique personalities. In explaining that the mission district is the most bicycle accident prone with nearly 100 accidents each year, for example, the Bay Citizen writes “with hipsters generally preferring the use of fixed-gear bikes over Segways, the Mission is awash with cyclists.”

Last summer, the report notes, the SFMTA counted 770 cyclists passing 17th and Velencia streets (the neighborhood’s main bike route), a 75 percent increase from 2006. Other neighborhoods with a high number of bicycle accidents include SOMA (85 each year) and Downtown (about 70 each year). Not surprisingly, Market Street reported more bicycle accidents than any other city artery, with 139 over the past two years.

What surprised me most is that the Bay Citizen found that a full half of bicycle accidents over the past two years were the fault of cyclists, compared to 40 percent that were the fault of car drivers. “Your mother could probably tell you this without a fancy chart,” the study continues, reporting that the majority of accidents are caused by speeding and turning violations, which both make up 14 percent of all bicycle accidents. Walloping bicyclists with car doors is the third (and probably most feared) cause, accounting for 10 percent of the city’s bicycle accidents.

What’s most troubling about the new statistics, is that although more people than ever are using bicycles, bicycle accidents in San Francisco are increasing faster than bicycle ridership. Over the past four years, San Francisco bicycle ridership has increased an astounding 58 percent. Since 2009, though, it has only increased three percent, compared to an 8 percent jump in bicycle accidents. This trend suggests that if San Francisco wants to make its streets acceptable for an ever-growing bicycle population, it will have to regulate the state’s bicycle laws and improve/add bicycle lanes citywide.

See the Bay Citizen’s infographic and our own interactive state-by-state map of bicycle laws for more information.