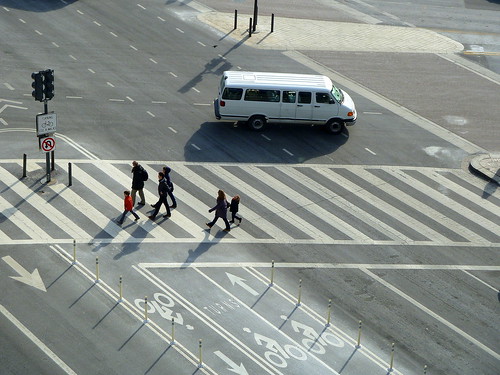 Jogging across San Francisco’s busy Masonic Avenue Monday, a pedestrian was blindsided by driver going 30 miles per hour, sending the jogger flying through the air and later to the hospital with a severely broken leg. SFWeekly correspondent Matt Smith writes that he and his daughter also would have been hit if they had passed the intersection on their tandem bicycle two seconds earlier. The terrifying collision shows that pedestrian accidents are far too common here in San Francisco and that the city must implement a plan to increase street safety and reduce pedestrian injuries and fatalities.

Part of the problem is that San Francisco is laced with a complicated grid of high-traffic arteries like Masonic (and Geary, Van Ness, Mission, etc), so motorists often don’t consider bicyclists or pedestrians while zooming through the city. “The speeding on Masonic is out of control,” UCSF nurse Annika Ehrlich told Smith. “This is a neighborhood with families and children, yet motorists treat it like a highway.”

But while the San Francisco Municipal Transit Agency and the city Board of Supervisors have vamped up efforts to implement a citywide pedestrian safety action plan, critics say the effort should have started and been completed long ago. Such a plan could have prevented three pedestrian deaths in a four-day period last month. Each year, more than 800 people are hit by cars in San Francisco, making it statistically one of the most dangerous walking cities in the country.

Since 1998, pedestrian advocacy organization Walk San Francisco has been an integral force in the push for a San Francisco pedestrian safety plan. The group says the city’s pedestrian accident statistics are unacceptable. “It’s so hard to actually get the information on how many people are hit and how frequent it is that people don’t realize the danger that exists to the pedestrians in this city,” Walk SF Executive Director Elizabeth Stampe told the San Francisco Chronicle. “Two to three people are being hit every day in the city. It’s an outrage.”