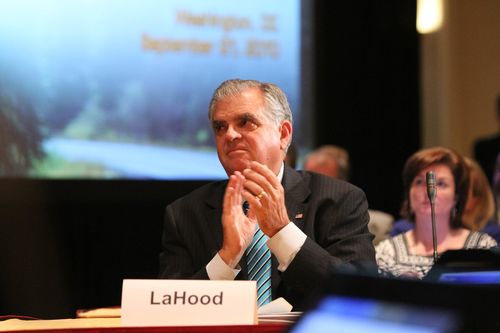 Last week, when Insurance Institute for Highway Safety president Adrian Lund doubled down on past criticism of Transportation Secretary Ray LaHood’s anti-distracted driving campaign, I hoped LaHood would respond. On his Fastlane blog Tuesday, he did that and more, launching a spirited and well-researched attack against those who say state and national enforcement agencies shouldn’t do everything they can to crack down on the dangerous practice.

Last time a lobby group tried to deny the importance of anti-distracted driving programs, LaHood fired back with some harsh words. “Regardless of what a powerful lobbying group has to say, the simple fact is that texting and talking on cell phones behind the wheel is a deadly epidemic,” he said in a press conference. “To suggest otherwise is to put your head in the sand. To spend considerable resources to suggest otherwise is a glaring waste.”

This time around, LaHood let the facts speak for themselves. Just last year, he wrote, distracted driving killed 5,500 people and injured nearly 500,000. Even the IIHS has reported in the past that texting or typing behind the wheel makes it four times more likely that the driver will crash. In April, the Department of Transportation launched pilot enhanced enforcement programs in Hartfort, CT and Syracuse, NY. LaHood proudly reports that in only six months, “hand held cell phone use has dropped 56% in Hartford and 38% in Syracuse; and texting while driving has declined 68% in Hartford and 42% in Syracuse.”

To most, it is an established fact that increases in technology have led to a surge in distracted driving. Fortunately, there are tech options for safer drivers. But many of these options are far from ubiquitious, and have not yet caused the drastic decrease in distracted driving that is needed to make the practice as taboo as drunk driving or neglecting to wear a seat belt.

By making distracted driving his number one priority, Secretary LaHood is already beginning to see a reduction in the number of people killed and injured by distractions. That’s largely due to new laws against the practice. But, says LaHood, “it’s also important for people to realize that as we fight to end distracted driving and get drivers to take personal responsibility for their behavior.”

So take the pledge to be a safe driver by cutting out distracted driving, and expect the same from your children, friends, family and co-workers.