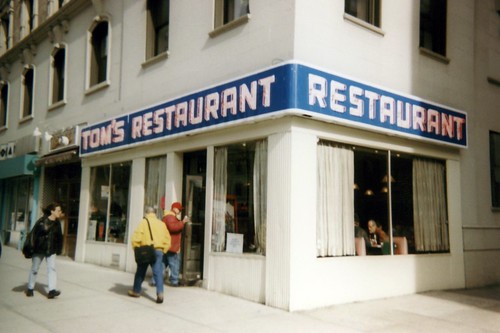 Gearing up for the holiday weekend, we thought it necessary to revive the blog’s legal humor category. With that, we’ve compiled 9 Seinfeld-related lawsuits, five fictional and four real, to commemorate the 9 years the 90’s mega-sitcom fantastically mocked most aspects, significant and mundane, of real life. And the show’s take on the legal industry was no different.


When Kramer spills coffee on himself in a movie theater, friend and Johnnie Cochran-inspired attorney Jackie Chiles encourages Seinfeld’s eccentric neighbor to sue the fast-food company. The chain agrees to award Kramer free coffee at any franchise store and $50,000, but before they can mention the cash, Kramer agrees to the free coffee–having erased all evidence of his injury by applying a topical Chinese balm recommended by Bob Cobb a.k.a. The Maestro.  Chiles exclaims “I am outraged!” and calls the settlement “lewd, lascivious, salacious, outrageous.”

The episode is a clear reference to the misunderstood 1994 lawsuit Liebeck v. McDonald’s Restaurants, in which a jury awarded 79-year-old Stella Liebeck $2.86 million for burns sustained by coffee spilled at a drive-thru window. Due to the high verdict, Liebeck became a symbol for unnecessary lawsuits, even after the award was reduced to just over $600,000. But in reality, the lawsuit was not as frivolous as the legend. The court found that McDonald’s kept its coffee at 180 degrees Fahrenheit, much higher than home-brewed coffee and temperatures at other restaurants. Liebeck suffered third-degree burns on six percent of her body and spent eight days in the hospital.

Indulging in the joys of smoking cigars, Kramer experiences the side effects of smoking cigars: a leathery and “hideous” face. Naturally, Kramer seeks legal advice from Chiles, who concludes, “your face is my case.” While discussing the lawsuit with Marlboro, a tobacco lawyer tells Kramer that the skin change gives him a “rugged masculinity.” Without consulting Chiles further, Kramer settles the case in return for his face on a massive Marlboro billboard in Times Square. Chiles calls the settlement “the most public yet of my many humiliations.”

After Kramer begins taking golf lessons from Stan the Caddy, he begins to consider a professional golf career. That is, until his hopes are dashed by injures sustained in a car accident caused by staring at a shirtless Sue Ellen Mischke, Elaine’s rival and “bra-less wonder.” Yet again, Kramer hires Chiles, who takes Mischke to court for “flouting society’s conventions” by refusing to wear a shirt. At the caddy’s suggestion, Chiles asks Mischke to try the bra on in open court, understanding that it must fit “like a glove,” another clear Johnnie Cochran reference. When the bra doesn’t fit, the judge acquits.


Kramer’s company, Kramerica Inc. develops a new form of oil tanker bladder which must be tested before it’s put into circulation. What better place to test the bladder than Play Now, George’s company which now knows that George had faked being disabled for the extra benefits? Thanks to a one-year contract, though, the company can’t fire George. While testing the bladder from the Play Now roof, Jerry’s girlfriend Claire crosses below, on her way to meet Jerry and discuss his insatiable need to attribute a voice to her belly button. At this point, Jerry had used the voice so much his friends no longer found it funny. But the oil bladder exploding on Claire below revives the humor. Unfortunately, Claire sues Play Now for damages, putting the company out of business and George out of a job (again).

While attempting to fly to Paris for a “last hurrah” before Jerry and George move to California, Kramer’s antics cause the flight to land unexpectedly in Latham, Massachusetts. Waiting to get back on their flight, the crew witnesses an overweight man getting carjacked and begins to crack jokes about the man’s size. When the carjacked man alerts an officer about their behavior, the four are arrested under the a state law that requires bystanders to help if they witness a citizen in danger. To win the case, the police officer wants to gather as much information on the four as possible, setting off a massive legal battle that includes statements from a long list of characters, most of whom loathe Jerry, Elaine, George, and Kramer. Even Jackie Chiles can’t bust the crew out, and they are eventually sentenced to one year in prison.

When you’re in the media spotlight, you get a lot of attention. For the most part, this attention was kind to the Seinfeld stars, but in a few key cases, the foursome learned the hard way that it can backfire. Here are four real lawsuits against Seinfeld and the show’s stars: 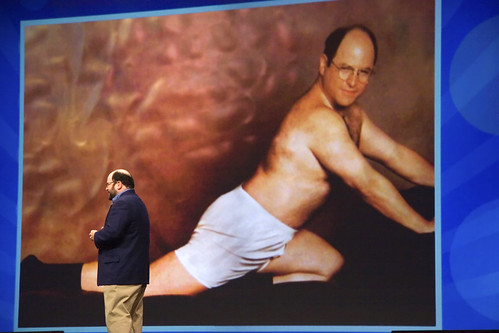 1.) Costanza v. His Own Personality

In 1998, Jerry Seinfeld’s college buddy Michael Costanza sued the comedian $100 million for harming his reputation by clearly using him for the basis for the show’s bizarre, spiteful character George. “George is bald. I am bald,” he said. “George is stocky. I am stocky. George and I both went to Queens College with Jerry. George’s high-school teacher nicknamed him ‘Can’t stand ya.’ So did mine. George had a thing about bathrooms and parking spaces. So did I.”

The New York Supreme Court Appellate Division dismissed the case because no episode included Michael Costanza’s “name, portrait, or picture,” and the plaintiff even agreed to a brief cameo in one episode. The court also ruled that the statute of limitations had run out since the suit was not filed within one year of the show’s 1989 debut. Seinfeld continues to claim that the character is based on the show’s co-creator Larry David, which if you’ve seen his HBO show “Curb Your Enthusiasm,” is not at all difficult to believe.

In April, the Second Circuit Court of Appeals ruled that Jerry’s real-life wife Jessica Seinfeld had not ripped off a cookbook idea from Missy Chase Lapine. Lapine said that Seinfeld’s book, “Deceptively Delicious” stole the idea of disguising healthy food for kids from her book “The Sneaky Chef.” The judges were unconvinced, and ruled that “stockpiling vegetable purees for covert use in children’s food is an idea that cannot be copyrighted.”

While this legal battle waged, Jerry got himself into some trouble during a taping of “The Late Show with David Letterman.” Referring to the lawsuit against his wife, Jerry told Letterman, “one of the fun facts of celebrity life is wackos will wait in the woodwork to pop out at certain moments of your life to inject a little adrenaline into your experience…If you read history, many of the three-name people do become assassins. Mark David Chapman. And you know, James Earl Ray. So that’s my concern.” Lapine took this opportunity to sue Jerry himself for claiming she may be a murderer or someone with “potentially violent or, at a minimum, hostile, tendencies, proclivities and activities.” The federal appeals judge declined to rule on the defamation claim, saying it was a state matter.

When audience members recorded a racist tirade by Michael Richards on their cell phone at the New York comedy club The Laugh Factory in 2006, his reputation was irreparably harmed. The men Richards insulted, Frank McBride and Kyle Doss, quickly hired attorney Gloria Allred to coax Richards toward a public apology and (maybe) payment of damages. Kramer apologized to the men in addition to civil rights leaders Jesse Jackson and Al Sharpton and Allred did not seek monetary damages. In 2009, when Richards appeared in the Seinfeld “reunion” on Curb Your Enthusiasm, he attempted to mock his behavior. After a black man makes Richards look foolish before studio executives, he exclaims “if only there were a horrible name that I could call you that would make you as angry as I am!” while bystanders capture the exchange on their cell phones.

If we missed anything, let us know in the comments.

One response to “4 Real and 5 Fictional Seinfeld Lawsuits”